For centuries, scientists have wondered what all things were made of and what caused all things to be different.

During 4th century BC, the Greek philosopher Democritus stated that matter could be divided into smaller and smaller parts. Since he thought that the smallest part would always stay together, he named that tiny part "atomos," which means "cannot be cut" in Greek. The atom is the building block of all matter. 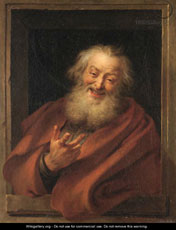 In 1918, Earnest Rutherford proposed that the center of the atom, called the nucleus, was made up of positively charged particles called protons.

Rutherford also predicted the existence of the neutrons, and in 1932, James Chadwick, Rutherford's assistant, proved that neutrons did exist.

In 1915, Niels Bohr proposed that electrons orbit the nucleus of an atom in a fixed path much like the planets orbit the sun. He hypothesized that the electrons were located on energy levels or shells outside of the nucleus. This model is called a Bohr model and is still used today to show a simplistic model of an atom.

Today, we know that electrons do not orbit the nucleus in a fixed path. Instead, these high energy, fast-moving particles move in every direction around the nucleus. This theory is called the Electron Cloud Theory. The animation to the right shows the electrons of a helium atom moving in a cloud around the nucleus.

Sources of images used for this section as they appear, top to bottom: