In order to determine the number of protons, neutrons, and electrons, we have to look at the periodic table of elements. Below is a partial periodic table. Click here to view a complete periodic table (scroll down to the second page).

So, if we need to determine the number of protons, we simply look at the element's atomic number.

How many protons does beryllium have?

How many electrons does beryllium have?

How many neutrons does an atom of beryllium have?

Let's try another example. Below is the periodic table entry for sodium. Determine the number of protons, neutrons, and electrons.

Given a drawing of an element as seen below, would you be able to identify the element and the number of protons, neutrons, and electrons? 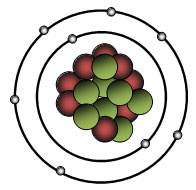 At first glance you might think, "No, I cannot identify the element because I do not know if the red or green circles are the protons or neutrons, and they are overlapping so I cannot count them."

What is the element?