Have you ever stood on a sidewalk in a hot, sunny day while now wearing shoes and felt the warmth of the sidewalk? The sidewalk was heated as it absorbed the Sun's energy. The Earth's atmosphere is heated in by the transfer of energy from the Sun.

Earth receives its energy from the Sun. The Sun's energy travels to Earth in the form of radiation. Radiation is the transfer of energy as electromagnetic waves. Radiant energy reaches the Earth in the form of both visible and invisible electromagnetic waves. Although the Sun releases huge amounts of energy, the Earth receives only a small amount of this energy. The diagram below shows what happens to the Sun's energy once it enters the atmosphere. 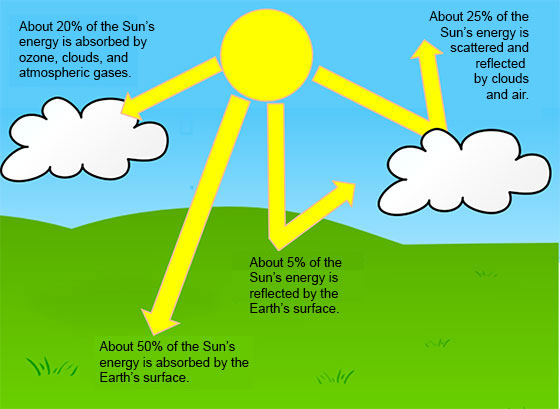 What percent of the Sun's energy is absorbed by Earth's surface?

After the energy from the Sun has reached the Earth, it is transferred to other objects in one of two ways. Conduction is the transfer of thermal energy (heat) from one material to another by direct contact. This type of transfer is like the sidewalk example from above. Thermal energy or heat always moves from warm to cold areas.

Most thermal energy in the atmosphere moves by convection. Convection is the transfer of thermal energy by the movement of a liquid or gas. Convection works when a liquid or gas is unevenly heated. Hot liquids (and gases) are less dense and rise, causing convection currents. The warmer section of the material will rise while the cooler part sinks. This creates a current of warmer material going up and a current of cooler material going down. An example of this is boiling water in a pan. The pan heats up the bottom of the water. The warmer water then moves to the top of the pan, while the cooler water sinks.