Global winds appear all over the world because of the following reasons:

Global winds are part of a pattern of air circulation that moves across Earth. The winds travel longer distances than local winds and each type of global wind travels in a specific direction. The three global winds are trade winds, westerlies, and polar easterlies.

To learn more about the types of winds, click on the boxes below.

Use what you learned about the global winds to label the following diagram. Drag the terms to the correct location. Some have already been done for you.

Local winds are influenced by the geography of an area. An area's local geography, such as a shoreline or a mountain, produces temperature differences that cause local winds, such as land and sea breezes. Uneven heating of the earth can happen on a local level as well as a global level. 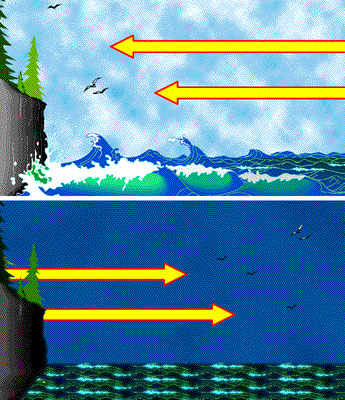 During the day, air above land heats more quickly than air above the water. The warmer air is less dense and the cooler, denser air moves toward the coast, causing a sea breeze.

At night, the air over land cools more quickly, reversing the process. The cool air moves toward the water and producing a land breeze.

Mountain and valley breezes are another example of local winds caused by the geography of an area. During the day, the sun heats the valley floor and warms the air above it. Warm air from the valley moves upward and creates a valley breeze. At night, the mountains cool faster than the valleys. Cold air sinks form the mountain peaks, creating a mountain breeze.