Much of what we know about planetary orbits and gravity can be traced back to two scientists, Johannes Kepler and Isaac Newton.

Johannes Kepler was a German mathematician and worked as an assistant to a Danish astronomer named Tycho Brache who had observed the positions of the planets for over a quarter of a century.  When Brache died in 1601, Kepler inherited all of his records. Kepler’s goal was to understand the motions of the planets. He described three laws of planetary motion.

Kepler discovered that the planet Mars did not move around the sun in a regular circle, but in an elongated circle called an ellipse.

Kepler discovered that planets seem to move faster when they are closer to the sun, and this is Kepler’s second law of planetary motion.

Kepler’s third law of planetary motion compares the period of a planet’s revolution with its semi-major axis. By doing some mathematical calculations, Kepler was able to show that by knowing a planet’s period of revolution, the planet’s distance from the sun can be calculated. 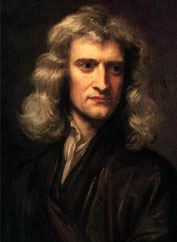 Newton did not understand why gravity worked or what caused it. Even today's scientists do not fully understand gravity. By combining the works of early scientists, Newton was able to explain how the force of attraction between matter works.

Newton hypothesized that small objects fall toward larger objects because they are attracted to each other by the force of gravity. For example, the planets fall toward the sun, but because the sun has so much more mass than the smaller planets only the planets appear to move.

Newton developed his law of universal gravitation, which states that the force of gravity depends on the product of the masses of the objects divided by the square of the distances between them. Newton did not close the book on gravity. Albert Einstein continued to study gravity, and his findings led to the development of his Theory of Relativity.