When you stand in your yard and look up at the sky, it seems as if there is no way to tell how far away the stars are. Astronomers are able to measure the distances to stars. Using telescopes—like the ones you learned about in lesson six of this module—and geometry, astronomers can determine the distance between objects in space. A parallax is used by astronomers to measures distances to stars. Parallax is the apparent changing in position of an object when viewed from different places.

Because of the Earth's revolution around the sun, nearby stars seem to change position relative to more distant stars. First, astronomers observe a star when Earth is on one side of the sun. Then, they observe the same star six months later, when Earth is on the other side of the sun. Astronomers measure how much the star appears to move against distant, background stars. They use this measurement, called parallax shift, to calculate how far away the star is. The smaller the parallax shift, the farther away from Earth the star is. The picture below shows how parallax shift is measured. 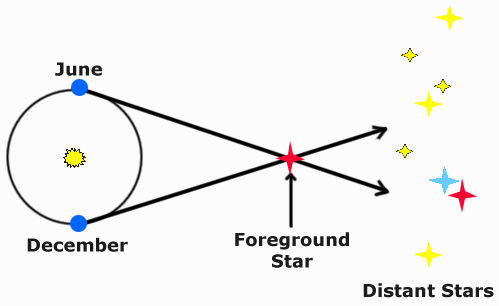 Even though astronomers have been measuring parallaxes of stars for centuries, only a few thousand stars have well measured parallaxes because it is such tedious and slow work. In 1989, the European Space Agency (ESA) launched a satellite called Hipparcos to accurately measure the parallax of some 120,000 stars. Measuring parallax works for stars within about 400 light years of Earth.

For stars farther than 400 light years from Earth, astronomers use brightness and color to determine distance.